“The Future of European Integration”

I am delighted to be with you today here in New York, and I thank the – more than 230 years old! – Institution of the French Consulate for this kind invitation.

The future of the European Integration is an exciting issue. I recently wrote a book about this, giving it the rather dramatic title of “Europe’s last chance”.

To understand what it is all about, let’s first take a look back on Europe’s past history. Secondly, we will analyze the status quo and finally point out possible reforms for the Future of European Integration.

I) At the beginning, that is to say in the 1950s, there has been a real vision for the European project.

Thanks to the French initiative, the six founding countries launched the European Coal and Steel Community in 1951. This was not just a sectorial enterprise, but part of a bigger project, which Robert Schuman already had announced in his famous Declaration of May 9th 1950, namely the “realization of the first concrete foundation of a European federation indispensable to the preservation of peace.”

And –did he warn – “Europe will not be made all at once, or according to a single plan. It will be built through concrete achievements which first create a de facto solidarity.”

He was right: over the years, the Six created the European Economic Community (1957), ending up with the common and now single market with its single currency, the Euro.

More and more countries had adhered to what today we call European Union.

But these member states always faced an inherent dilemma: how to go forth in the integration without losing too much of sovereign power?

Until the beginning of the Nineties, it was a coherent group, and the twelve members similar enough to adapt to the common system. The European Union functioned quite well, and at Maastricht in 1991, a common foreign policy and a single currency could be set on the agenda, together with a European citizenship.

But over the years, and after the fall of the Berlin wall, and the crumbling of the Soviet Union the pressure to enlarge and englobe Eastern Europe led to a more and more heterogeneous Union.

The great enlargement on May 2004 signed the beginning of the end, as the European Institutions had not at all been adapted to this numerous extension.  Who can believe that a system which had been created sixty years ago for 6 countries and with limited competences, could be effective with 27 then and 28 today?

Another point I would like to stress and which people often forget is that a second European project had emerged – launched by the British in 1960: the EFTA (European Free Trade Association). It was a trade bloc-alternative for European states which were either unable or unwilling to join the EEC.

Today, we still observe this division in Europe.

II) So let’s take a look now on its status quo.

On the one hand, we have the small and homogeneous group of the Euro zone, pushing forward integration in the historical line of the Schuman-Monnet project.

On the other hand, we have the EU-28, a big free trade zone with a more liberal and commerce-oriented logic. It is probably called to extend itself further, and will reject any progress of integration, as brilliantly expressed by Great Britain and other member countries, for instance those who benefit of an “opt-out” from the different EU chapters: from the Euro (UK, Denmark and Sweden), from the Schengen agreement (GB and Ireland) or from the common defense policy (Denmark).

Both European projects today suffer from the economic crisis, as the continent lacks sufficient growth and industrial competitiveness.

Even worse: structurally, the system has become unable to function and to perform.

There has, in fact, been an untoward trend of the European Institutions to grab more and more power over the years.

Instead of following the initial rules, today we have one Commissioner per country, which results in making them represent their countries’ interest and not much of a higher European common good! This naturally leads to a multiplication of interventions, as each Commissioner wants to justify its existence by proposing new measures or regulations. That’s bureaucratic saturation at its best!

The Commission has also constantly been seeking for becoming Europe’s government, a role which naturally falls in the hands of the European Council. Unfortunately, the latter is not led by visionary leaders anymore.

People feel that Heads of States and Governments come together very often, but that there is not much coming out of these “summits of the last chance”.

This lack of productiveness stands in opposition to the growing importance and autonomy the EU promotes.

That creates frustration, boredom and passiveness among European citizens.

The result is growing abstention and growing voices to the Eurosceptic or populist parties during parliamentary elections.

How can we get out of this vicious circle?

III) Possible reforms for the Future of European Integration

Instead of remaining in the confrontation between the two logics, we should accept their parallel existence:

The larger Union of 28 and more countries could continue its way, with Great Britain playing a key leading role.

And let me insist here: the British referendum about EU membership is not a pity at all. It offers an opportunity for clarification! Prime Minister Cameron has pledged to renegotiate the terms of the membership with the other member states before holding the poll. I hope he will be listened to! Most of the British demands are legitimate. Who in this assembly would be against less bureaucracy?

On the other hand, we have the smaller and willing group of the Euro-zone which I call “EUROPA”. This group should not be slowed down by others in its further integration process. It could accomplish the foundations of the European Federation Robert Schuman spoke about 65 years ago!

This would not be a conventional Federalism as we know it from the United States for example, where the federal State centralizes the main competences.

It would be a new approach, leading progressively to a “Federation of Nation States”. Its member States would preserve their identity and skills and transfer only those competences to the European level they would wish to see implemented by it. The top-down model does not function anymore; we have to tend to a new method where national competences are willingly transferred to the European level!

Why not go forward and create an Economic Power of the 21st century? This would be possible by launching a common fiscal and economic Union.  Same currency, same taxes – same budget equilibrium, same debt! Everything would be easier for citizens, companies etc., which could move freely in this space, when keeping the same fiscal, economical, and social regimes. This is a concrete and realistic reform!

The method would not be to adjust one national fiscal regulation to another, but to come together asking “which would be the contemporary tax system for Europe”? The aim would be reached very progressively, let’s say, by the end of 2030.

EUROPA could thus progressively deliver a full monetary, budget and fiscal Union, and be armed with a European Treasury. Of course, this Treasury should not to be used to clean the budget disorders of the various Members States, but be dedicated to the funding of the European policy, via Euro-bonds, once the economic imbalances between the member States would be stabilized.

A Mechanism of financial solidarity, like it exists in Germany with the “Länderfinanzausgleich”, would allow transferring resources from rich to poor member States, when the differences are due to natural conditions.

All this could be pushed forward by a Directory of the Heads of States and Governments of EUROPA.

And all this without any Treaty change!, but just the political will of the Member States.

Here in the US, where security issues are essential, you may wonder why I do not propose to push forward a political or defense Union. That’s because people are not ready for it.

We could concentrate on becoming one of the world economic super-powers in production, research, and innovation!

« Savoir, penser, rêver – To know, to think, to dream – tout est là – everything is there», wrote Victor Hugo (Océan).

Now that we know where we come from, we can think about where to go and how to do it. May we wake the European dream again!

It is Europe’s last chance. 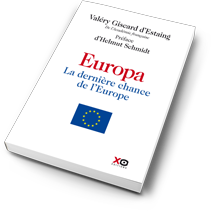